The RAD-Gigastar can monitor one pair of 100/1000BASE-T1* connections with an additional pair of SFP cages to support optical/ copper SFP transceivers. In addition, the RAD-Gigastar can also operate as a programmable gateway to create an Ethernet-to-Ethernet or a CAN-Ethernet gateway.
Features* – BroadR-Reach® devices also supported; 1 – 1000BASE-X supported via SFP;  2 – Check with Intrepid for SFP compatibility. 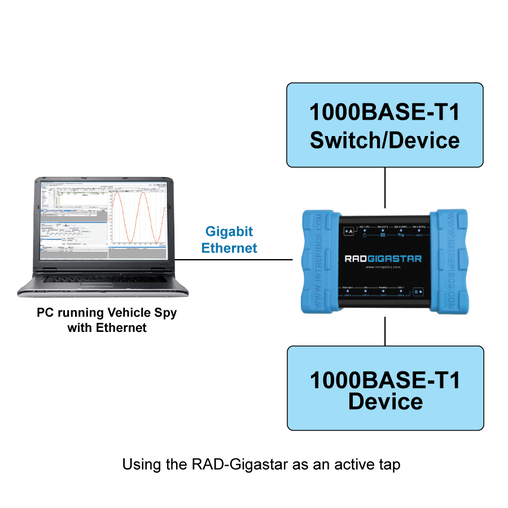 A primary use of the RAD-Gigastar is to act as an active tap, transparently interposing itself between a pair of Automotive Ethernet devices.This can be either an ECU-to-switch or an ECU-to-ECU link.The traffic from each device on a tapped link is forwarded to its partner, ensuring seamless operation of the network. Copies of all messages/streams are also aggregated and sent to the PC over the RAD-Gigastar’s Gigabit Ethernet link, where they can be analyzed using Vehicle Spy Enterprise software. 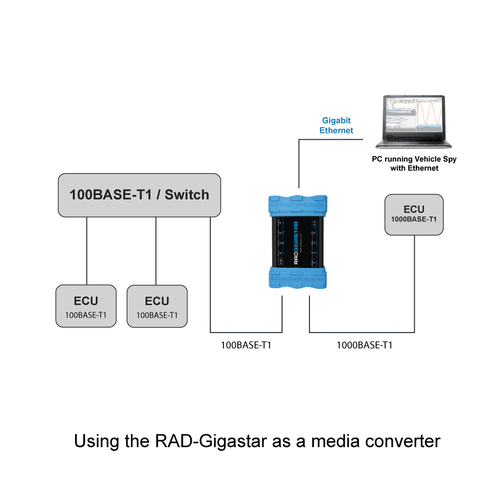 The RAD-Gigastar can act as a media converter for 100/1000BASE-T1, 100BASE-TX, 1000BASE-T, 1000BASE-X to standard 10/100/1000 Ethernet which is useful for connecting a PC to a 100/1000BASE-T1 host or switch. This allows you to simulate nodes or perform direct diagnostics or ECU flashing. In addition, the “pure” media converter mode disables encapsulation of messages and allows connections between media of differing bit rates, buffering as needed.
Stand-Alone Logging, Scripting, and Simulation

RAD-Gigastar can be linked with other Intrepid tools and autonomous logger systems using the Intrepid Time Sync format. ITS uses a proprietary method to provide very tight microsecond timing sync to all connected devices. For example, by using ITS between a RAD-Gigalog and RAD-Gigastar, you can record a multigigabit data steam with up to 6 terabytes with the RAD-Gigalog, while recording even more data with the RAD-Gigastar. Both datasets will be fully synced.

The RAD-Gigastar is uniquely configured to test central gateways. Connect to the “clean” and “dirty” side of the central gateway with four Ethernet ports, as well as the 6x CAN FD networks. All data is synchronized with better than 10 ns accuracy

RAD-Gigastar’s user friendly and powerful design allows you to validate and debug physical layer/PHY issues. The RAD-Gigalog provides PHY-level information including signal quality measurement, master/slave or negotiation modes, and other qualities available from the PHY.